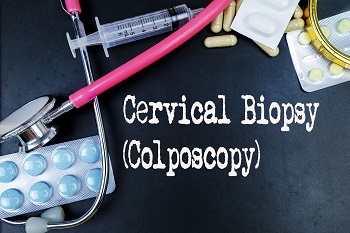 What is a cervical biopsy?

A cervical biopsy is a surgical procedure in which a small amount of tissue is removed from the cervix. The cervix is the lower, narrow end of the uterus located at the end of the vagina.

A cervical biopsy is usually done after an abnormality has been found during a routine pelvic exam or Pap smear. Abnormalities can include the presence of the human papillomavirus (HPV), or cells that are precancerous. Certain types of HPV can put you at risk for developing cervical cancer.

A cervical biopsy can find precancerous cells and cervical cancer. Your doctor or gynecologist may also perform a cervical biopsy to diagnose or treat certain conditions, including genital warts or polyps (noncancerous growths) on the cervix.

Three different methods are used to remove tissue from your cervix:

The type of procedure used will depend on the reason for your biopsy and your medical history.

How to prepare for a cervical biopsy

Schedule your cervical biopsy for the week after your period. This will make it easier for your doctor to get a clean sample. You should also make sure to discuss any medication you take with your doctor.

You may be asked to stop taking medications that could increase your risk of bleeding, such as:

Avoid using tampons, douches, or medicated vaginal creams for at least 24 hours before your biopsy. You should also avoid having sexual intercourse during this time.

If you’re undergoing a cone biopsy or another type of cervical biopsy that requires a general anesthetic, you’ll need to stop eating at least eight hours before the procedure.

On the day of your appointment, your doctor might suggest you take acetaminophen (such as Tylenol) or another pain reliever before you come to their office. You may experience some light bleeding after the procedure, so you should pack some feminine pads. It’s also a good idea to bring a family member or friend along so they can to drive you home, especially if you’re given general anesthesia. General anesthesia may make you drowsy after the procedure, so you shouldn’t drive until the effects have worn off.

What to expect during a cervical biopsy

The appointment will begin as a normal pelvic exam. You’ll lie down on an exam table with your feet in stirrups. Then your doctor will give you a local anesthetic to numb the area. If you’re undergoing a cone biopsy, you’ll be given a general anesthetic that will put you to sleep.

Your doctor will then insert a speculum (a medical instrument) into the vagina to keep the canal open during the procedure. The cervix is first washed with a solution of vinegar and water. This cleansing process may burn a bit, but it shouldn’t be painful. The cervix may also be swabbed with iodine. This is called Schiller’s test, and it’s used to help your doctor identify any abnormal tissues.

The doctor will remove the abnormal tissues with forceps, a scalpel, or a curette. You might feel a slight pinching sensation if the tissue is removed using forceps.

After the biopsy is finished, your doctor may pack your cervix with absorbent material to reduce the amount of bleeding you experience. Not every biopsy requires this.

Recovering from a cervical biopsy

Punch biopsies are outpatient procedures, which means you can go home right after the surgery. Other procedures may require you to remain in the hospital overnight.

Expect some mild cramping and spotting as you recover from your cervical biopsy. You may experience cramping and bleeding for as long as a week. Depending on the type of biopsy you’ve undergone, certain activities may be restricted. Heavy lifting, sexual intercourse, and the use of tampons and douches are not allowed for several weeks after a cone biopsy. You may have to follow the same restrictions after a punch biopsy and ECC procedure, but for only one week.

Let your doctor know if you:

These symptoms can be signs of an infection.

Results of a cervical biopsy

Your doctor will contact you about your biopsy results and discuss next steps with you. A negative test means that everything is normal, and further action is usually not required. A positive test means that cancer or precancerous cells have been found and treatment may be needed.