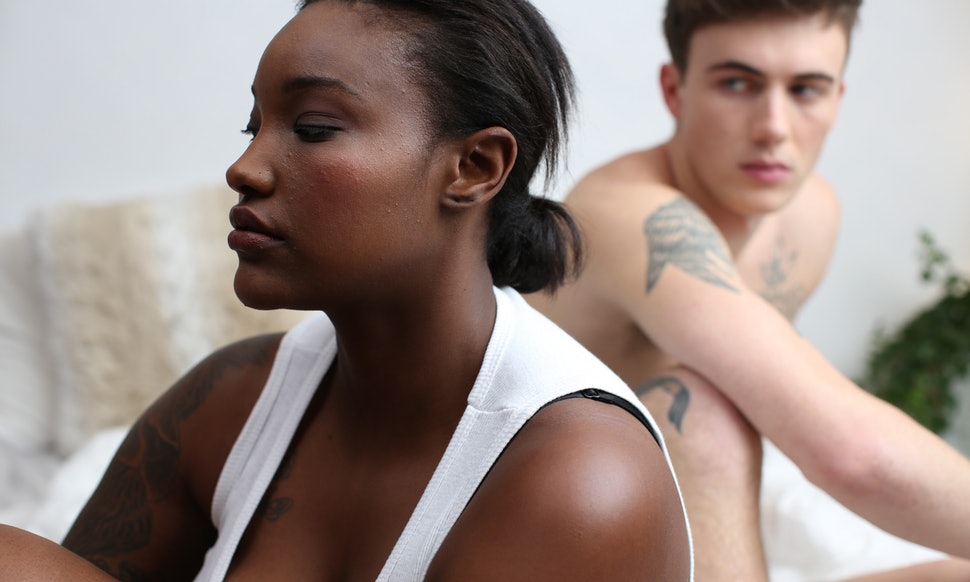 Should you stay after someone cheats or go? Sadly, many of us have been there — dated someone whose behavior is suspicious, whether they spend an inordinate amount of time on their phone (I know that seems like everyone!), not specific about what they do when they’re not with us, or just plain MIA. Once, a boyfriend played his voicemail messages in front of me — on speaker — and I heard a woman gushing, “It was so amazing to kiss you last night!” He nervously tried to turn down the volume or shut his phone off, but it was too late. I’d heard enough. Another time, a first date confessed an affair to me (forgetting I was his date, not therapist — not to mention, red flag!). He said every man in his family had done it (congratulations?) and he was not going to again. Hmm.

“Research shows that women cheat because they feel emotionally deprived, and men because they feel sexually deprived,” therapist and author Tina B. Tessina, PhD (aka “Dr. Romance”) tells Bustle. “He or she is not thinking of future problems (at least, when connecting with the other person) and is just masking emotional pain. Discovering your partner has been unfaithful is a terrible blow. It changes your whole set of expectations and beliefs about your relationship. Suddenly, you have a whole set of questions you may not have ever thought of before. Why didn’t I know? Did my partner ever love me? How can I ever trust my partner again? Can we survive this?”

“While I don’t think you should stay and suffer if nothing’s working, in my practice, I see many couples who do the work and wind up happier than before.”

Whether or not you have been on the receiving end of cheating, there are telltale signs to look out for to see if someone’s up to no good behind your back. There’s also contemplating whether you should give the relationship another try or leave it behind. I spoke to some experts to help with the decision if you’re struggling with the question: My partner cheated… should I stay or should I go?

1. Monogamy Is Something You Choose Every Day

“Monogamy is not something that happens automatically because you make a one-time vow when you first commit to each other,” Tammy Nelson, PhD., tells Bustle. “Monogamy is something you choose every day, it is a gift you give your partner and yourself, it is a sacred practice like yoga or meditation. And with practice, you will get better and better at it.”

2. It Is Possible To Repair A Marriage After Infidelity

“Because you feel betrayed, your first impulse is usually anger, and wanting to leave — fight or flight,” Tessina tells Bustle. “But, after you calm down, you realize there’s a lot you’ll lose, and you may have children to consider. Don’t make an instant decision you may regret later, after the damage is done. It’s possible to find an extraordinary love after divorcing late in life, but most of my clients report the potential partners out there are no better than the ones they left. While I don’t think you should stay and suffer if nothing’s working, in my practice I see many couples who do the work and wind up happier than before.

As a therapist who works with couples every day, I know it is possible to repair a marriage after infidelity. Not only is it possible, but when children are involved, it’s desirable. Admitting and correcting bad behavior, rebuilding trust, and forgiveness are the main issues. If there is a sincere change in behavior, and if the problems that led to the infidelity are addressed and corrected, and both parties approach the problem with a sincere wish to discover what went wrong and fix it, then forgiveness is an important part of the healing process, whether the couple stays married or not.”

3. It Is Essential To Attempt To Regain A Sense Of Control

“I am a relationship expert who works extensively with couples and folks who deal with infidelity on a regular basis,” Jeffrey Sumber, Therapist and Author of Renew Your Wows: Seven Powerful Tools to Ignite the Spark and Transform Your Relationship, tells Bustle. “One of the most important things that must happen after the cheatee discovers the cheating is to allow the process of emotional reaction to occur before even attempting to make rational decisions. As I detail in my book, Renew Your Wows, mixing facts and feelings is a losing proposition. They are a volatile compound that will inevitably lead to catastrophe. So, the wounded party must have the opportunity to express their hurt, disgust, anguish, etc. without the other attempting to rationalize, defend, or plead for leniency. We must feel safe to express ourselves, especially in situations where we feel out of control. Once the emotional roller coaster takes place, it is essential to attempt to regain a sense of control. We typically do this through collecting information and grasping the situation for ourselves. The wounded party must find out what they need to find out within reason. If they are still interested in remaining in the relationship, they typically will need access to social media, phone passwords, emails, etc., and if the cheater isn’t willing to forego their freedom for a time, typically 3-6 months, then there is little likelihood that the relationship will make it past the wound.”

4. It Takes Time To Rebuild Trust

3) Take every measure possible to make sure the behavior doesn’t repeat.

4) The victim agrees 1-3 have been sufficiently done.

Often with infidelity, there are multiple other deceptions such as lying, deleting emails, keeping secrets about ongoing contact. For each act, the steps must be redone. I recommend full disclosure about contact, but give the victim the power to ask for as much or as little follow-up as they needed. It’s important that the victim doesn’t feel like they have to nag for the information. It can be hard for a couple to determine how much or how little checking the victim needs to feel safe again. A deception is a major withdrawal from the marital bank account and it is normal to feel trauma and lack of safety. It takes time to rebuild trust. If the perpetrating partner cannot be patient, safety will not be restored.”

5. The Nature Of The Infidelity Matters, Too

“It happens, and it appears to be happening a bit more in our device gouged-times,” Dr. Ramani Durvasula, Licensed clinical psychologist, Professor of Psychology, and Author, tells Bustle. “Yes, it can be recovered from, but there is scar tissue. Every relationship has a code of conduct and the temperaments of the people who make up every relationship are different. That said, cheating in most relationships is a breach of trust and in an intimate space. Obviously, the nature of the infidelity matters, too (one-night stand? sex worker? your sister? emotional cheating and your partner has fallen in love with someone else? ongoing pattern?). Couples can and do get past it. But, as I always view it, it permanently changes the landscape of the relationship — where there was once wide open space, a mountain now exists and it is never going away. It is now part of the narrative of the relationship.

By understanding the origin of it, the nature of it, whether responsibility was taken, and the reasons for moving forward, work can be done to re-render the relationship (and sometimes, because of intervention, even stronger). Ground rules include: not being allowed to chronically use reference back to the affair as a weapon, but also for the cheater to realize there is a new world order and boundaries are tighter and mindfulness must be higher. Cheating does not have to be a death knell for a relationship, but it is a good thing to try to prevent because it can definitely weaken the infrastructure. As such, I often recommend to couples that they consider a course of therapy during the engagement phase, or at the time of challenging transitions, to give them the skill sets they need to avoid ‘careless fixes’ like inappropriate relationships.”

6. An Affair Is Typically Not The Problem In The Relationship, But, Rather, A Symptom Of A Deeper Problem

“I am an infidelity expert, an infidelity survivor and the author of Ultimate Betrayal: Recognizing, Uncovering and Dealing with Infidelity,” Danine Manette, Speaker, Criminal Investigator, Author, tells Bustle. “I’ve also run an infidelity support in my area for five years. Can all marriages survive infidelity? Certainly not, but the ones that do have several things in common: Total disclosure from the cheating spouse, a willingness on both parties to repair the marriage, No contact with the other woman/man whenever possible, and really hard work to ensure any chance that the trust can be rebuilt. Here is a list of things I comprised for a cheater who wants to rebuild trust after an affair.

Will the marriage ever be the same? Hopefully not. Since an affair is typically not the problem in the relationship, but, rather, a symptom of a deeper problem, working through the feelings and events which led to the affair can serve as a way for couples to tear down their entire relationship and rebuild from scratch. Sometimes, relationships end up stronger following an affair. More often, however, even when rebuilt, once one has experienced something as painful as a spouse’s betrayal, there is always a part of the victim spouse which remains stronger, more aware, more vigilant, less naïve, and less ‘unconditional’ than prior to the affair. This sometimes strengthens a marriage. But, other times, causes a wall to intimacy, which, in some cases, is never removed, just ‘lived around.'”

Ultimately, your next step after infidelity depends on a number of factors, but know that whatever you choose to do, you will be able to move on from it and trust again.