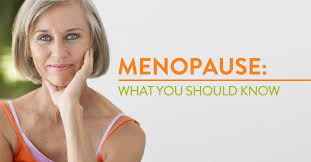 There is, however, a natural end to those ups and downs — menopause. As the Mayo Clinic notes, as our bodies produce less estrogen and progesterone in our 30s, our periods begin to change and eventually our ovaries stop producing eggs and we don’t menstruate again.

But if our bodies start changing in our late 30s, what age does menopause happen? The answer to that might surprise you.

To be clear about terms: menopause is when a woman hasn’t had a period for at least 12 months and is medically considered to have ended her menstruating years. In the United States, the average age to hit menopause is 51, according to the Mayo Clinic.

But there are years before that where you might experience symptoms commonly associated with menopause— hot flashes, night sweats, vaginal dryness — which is a phase called perimenopause or the menopause transition. During this phase, women are still menstruating, though it may be irregular. Periods could be heavier or lighter, more frequent or less frequent.

Perimenopause lasts about four years on average, according to the Cleveland Clinic, but can be as short as a few months or can even last significantly longer. “After 45 it’s pretty regular for women to start experiencing some irregular periods, hot flashes and vaginal dryness with intercourse,” Dr. Wen Shen, M.D., assistant professor of gynecology and obstetrics at Johns Hopkins University School of Medicine, tells Woman’s Day.

The upper limit for how late a woman might still be getting a period is typically between ages 54 to 56. “The oldest patient I have who is still going strong is 58,” Dr. Shen says.

A full list of the early signs of menopause includes:

These symptoms can also continue for several years after a woman’s final period. Some of them will fade in time, but others, like vaginal dryness, tend to only get worse with age, says Dr. Shen. The Office on Women’s Health recommends that you speak with a doctor if any of your symptoms bother you, as there may be treatments that can help, including menopausal hormone therapy.

How do you know when you’re fully menopausal?

Once you’ve gone a year without a period, you’re considered menopausal and you don’t need to worry about contraceptives for pregnancy prevention any longer.

Consider asking your doctor for a birth control prescription, as it can alleviate menopausal symptoms.

But don’t let a shorter chunk of time fool you — if it’s only been six months without a period, there’s still a risk. “I have indeed had three women (who were not trying to conceive!) get pregnant at age 46,” Dr. Minkin says. These were women who had gone several months without a period and knew they were perimenopausal, but thought the transition was through. Not so.

Dr. Shen recommends birth control pills to women who are perimenopausal and sexually active because it heads off two problems at once. “It alleviates their menopause symptoms and helps protect them against unintended pregnancies,” she says.

What factors effect how early or late women hit menopause?

Genetics seem to play a major role in how early or late menopause starts. “Family history is quite relevant, and is indeed the best predictor of age at menopause,” Dr. Minkin says. If you’re able, ask the women in your family when they went through menopause to get a sense of when to expect it in your own life.

Beyond your genetic background, the biggest risks associated with early menopause are smoking, cancer treatments, and hysterectomy — which removes the uterus but leaves the ovaries intact, and can allow menstruation to continue.

A December 2017 study published in Human Reproduction also suggested that women who were underweight may go through menopause earlier than women of average weight, whereas a 2002 study published in International Journal of Obesity and Related Metabolic Disorders suggested that women with high BMIs more commonly go through menopause later than average.

If you’re in the right age range and experiencing symptoms, you might be going through menopause. If it seems too early, or if symptoms are bothering you, it’s worth speaking with your doctor to see how they might be able to help.