The use of aventurine by humans began millions of years ago. It has been highly appreciated for its usefulness and beauty ever since. This is a very hard, brittle stone that comes in a rainbow of colors. The heart of aventurine meaning is consistent for all aventurine colors but there are slight variations for some of them.

Aventurine stone has been utilized by humans for over two and one half million years. Tools made with aventurine rocks were found in the Omo Valley in Ethiopia. Even primitive man appreciated this green quartz for its superior brittleness and hardness. Aventurine’s brittleness makes it easy to create a sharp edge that lasts and lasts because of its hardness.

Green aventurine was used to adorn statues in ancient Tibet. The Tibetans would affix aventurine gemstones to the eyes, believing the green quartz would enhance the visionary powers of the statues. This belief remains at the heart of aventurine meaning. The ancient Tibetans also wore jewelry made with aventurine to help correct nearsightedness and bolster creativity.

The most common aventurine color is green but it can also be blue, brown, orange, peach, purple, red, silvery-gray or yellow. These other aventurine colors are rarely gem-quality, though. Aventurine is a type of quartz. Different colors occur due to the presence of other minerals like hematite and mica.

Up until the 1800’s, aventurine was known as the “stone of the Amazons.” Aventurine rock deposits in Brazil were thought to have been mined by Amazonian warriors. The mined aventurine rocks were carved into talismans and jewelry.

Green aventurine is believed to be more powerful than the other aventurine colors. It has long been thought to bring abundance, good luck and opportunity. According to folklore, carrying a piece of green aventurine in a left-side pocket while purchasing a lottery ticket imparts good luck. Green aventurine or “fairy treasure” is also used to bring good luck to one’s home by placing three stones in a dish and setting them in front of a garden gnome.

Red aventurine is said to attract money, a benefit at the heart of aventurine meaning, when it is placed in a red bag along with a little spice like cinnamon or ginger. Fertility may be increased if red aventurine is placed in a red bag with dried rose petals or dried rosemary. For good luck when the odds are against success, hold a small piece of the red quartz in one hand, say what is needed out loud then throw the red aventurine as far as possible. It is believed the person who finds the red quartz will also have good luck. 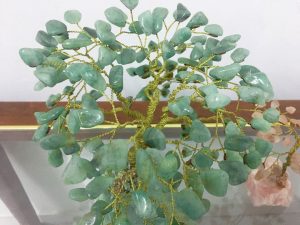 Green aventurine meaning has a lot to do with its reputation as the “Stone of Opportunity.” It imparts a winning attitude and energy, naturally improving the likelihood of success in all areas of life. The green quartz is ideal for any situation from a first date to getting a promotion at work. It is so powerful it does not even have to be worn as jewelry or held in order to glean the aventurine benefits. Just having it nearby will provide the necessary exposure. These powerful aventurine stone benefits are at the heart of aventurine meaning.

A strong earth connection adds to green aventurine meaning. An enhanced appreciation and understanding of the vibrations that emanate from nature and their soothing effects on both body and mind are included in green aventurine meaning. The green quartz repels environmental pollution and absorbs electromagnetic smog. When affixed to a cell phone, green quartz may provide protection from electromagnetic radiation.

Red aventurine meaning is all about re-vitalization, energy and action. This red quartz utilizes earth and fire elements to enhance one’s life force or prana. It imparts new, productive energy as well as the perseverance and determination to accomplish tasks and make progress in life. Red aventurine powers re-vitalize one’s sexuality, confidence and creativity with fresh excitement. All of these red aventurine benefits go back to aventurine meaning. 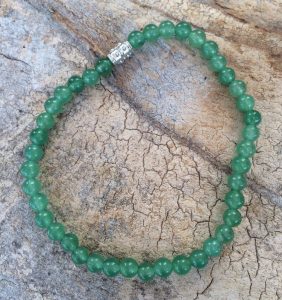 Green aventurine healing properties encourage harmony between the auric, emotional, intellectual and physical bodies. One’s natural rhythm is restored in keeping with aventurine meaning. Female/male energy is balanced while negativity dissolves away. The ability to live life in accordance with what is in one’s heart is facilitated by green aventurine spiritual healing. Change, renewal and re-vitalization are more easily embraced, in keeping with aventurine meaning.

Green aventurine is firmly connected with the devic kingdom. This is a good crystal to include in grids to counteract geopathic stresses on gardens and homes.

Spiritual healing properties of aventurine that is red in color focuses on action and energy, in keeping with red aventurine meaning. Divine inspiration and ideas are facilitated by red aventurine due to its ability to help clarify the best course of action. It then enhances one’s courage while imparting the energy and persistence needed to see the idea through to fruition.

Aventurine is used to enhance connections with spirit guides as well. During a medicine wheel ritual, participants should hold a piece of aventurine stone near the heart. There have been accounts of participants who held the stone feeling a wash of love from their spirit guide during the ritual.

Green aventurine meaning in Feng Shui is wood energy. This is the Feng Shui energy for new beginnings, expansion, good health, growth and nourishment. Place green aventurine rock in the east or southeast end of a room or home for abundance, vitality and healthy growth. A child’s room, dining room, kitchen or an area where a new project is about to begin can be improved with green aventurine.

Red aventurine meaning in Feng Shui is fire energy. Activity, brightness, enthusiasm, illumination and warmth are brought into the home or room. It is Yang energy that brings action, emotion, heat and passion in concepts, ideas and sex. Place red aventurine in the south of a room or home but use it sparingly. Too much of its sun power and fire energy can be overwhelming.

The physical healing properties of aventurine are focused on the heart and circulatory system. Green aventurine crystals are believed to facilitate improvement in cardiac conditions, heart problems and recovery from illnesses and surgery involving these areas. Green quartz crystals may enhance energy and movement while they assist with regeneration of healthy tissue, as indicated by aventurine meaning. They are believed to assist with lowering cholesterol while reducing the likelihood of heart attack or arteriosclerosis.

Red aventurine healing properties are all about strength, in keeping with aventurine meaning. It may also enhance the production of red blood cells while improving circulation. Balance within the immune system and help with auto-immune disorders may be facilitated with red quartz. It may also raise metabolism and low blood pressure while controlling an irregular heartbeat and cholesterol levels. Health problems due to hemophilia and radiotherapy may also be reduced by red aventurine.

Cleansing red aventurine properties may help reduce the level of toxins in the liver. They are also thought to correct problems in the area of fertility, libido and the reproductive system in general. These aventurine powers are all tied to aventurine meaning. 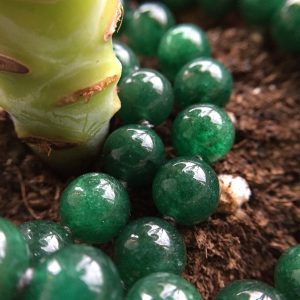 Emotional wounds are more easily healed with green aventurine’s soothing energy, which is supported in green aventurine stone meaning. A problem with depression, feeling defeated or feeling out of balance in life is more easily recognized, which is the first step to emotional healing. Unhealthy relationship patterns become clearer. Green aventurine properties promote good humor, optimism, hope and joy. They help keep one well-grounded during times of change and emotional upheaval.

Red aventurine healing properties in the area of emotional healing are all about strength, vitality, determination and perseverance. Red quartz crystals provide self-assurance and strength but keep one level-headed while pursuing important goals. All of these benefits are supported by red aventurine crystal meaning. They help one find their sense of humor, providing a better environment for dealing with past mistakes and the confidence to move forward.

Green aventurine properties work well with the heart chakra. Wear a pendant that suspends the green quartz at the level of the heart chakra to help balance it and possibly get a little help in the romantic relationship department.

Red aventurine powers are beneficial for the base, sacral and solar plexus or three lower chakras. Mental abilities as well as sexuality and vitality can be improved through these chakras.

White aventurine properties work well with all chakras and may bolster one’s ability to experience psychic visions. Wear jewelry made with white aventurine gemstones or place them on the various chakras during aventurine chakra sessions.