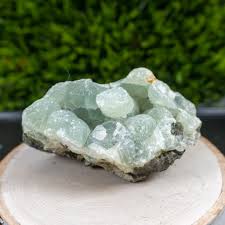 Prehnite was named after the Dutchman Colonel H. Von Prehn (1733-1785), who first discovered the stone at the Cape of Good Hope in South Africa. He then brought and introduced prehnite to Europe. Prehnite is not usually used for jewelry. It is mostly used as ornamental stones or bought by collectors. Prehnite is usually cut into facet cuts or cabochons, some displaying a cat’s-eye effect. Step and baguette cuts are also popular. Most specimen of prehnite is small. Prehnite is usually of an oily green color, but may also range from colorless to gray, pale green, brown, yellowish green, or pale yellowish. Specimen may also display white streaks, mostly in the pale green and pale yellowish green specimen. Some pale yellowish prehnite is quite fibrous, and is therefore cut en cabochon and may show the cat’s eye effect.

Prehnite’s color fades when it is extracted and exposed to air. Prehnite has a vitreous luster and is typically translucent, though it can also be near transparent. It rates a 6 on the hardness scale. It is best to clean prehnite in soapy water. Prehnite is found in basaltic volcanic rocks, in veins and cavities in igneous rocks, in some very low-grade metamorphic rocks, and as a product of the decomposition of plagioclase feldspar. Prehnite usually occurs as botryoidal masses. It is rare to find prehnite as columnar or tabular crystals. Prehnite is often found in association with zeolites. Other associated minerals include z, calcite, copper, stilbite, and datolite. Extremely hard prehnite may be confused with smithsonite, gyrolite, and hemimorphite.

Prehnite can also occur as a growth over another mineral. Pale green prehnite masses are found Stirling, Renfrew, and Dunbarton, in Scotland. Dark green or greenish brown masses are found in Australia, and aggregates of crystals are found in France. Various types of prehnite can also be found in Black Forest, Baden Wurttemberg, in southwest Germany; the Harz Mountains of Lower Saxony, northwest Germany; Pune, Maharashtra, in western India; St. Just and the Lizard Peninsula, Cornwall, in southwest England; and on the Isle of Mull, Argyll, in western Scotland. Prehnite can also be found in various locations around China, Austria, Italy, Canada, and South Africa. In the United States, prehnite is found in Essex County and Middlesex County, Massachusetts, Keweenaw County, Michigan, and Passaic County, New Jersey.

Prehnite is a stone that is extremely helpful for those who have trouble letting go of material possessions. It helps the wearer throw things away, and organize what is kept. People who hoard possessions or love, do so out of a deep feeling of deprivation, which may have come from past life experiences, where they may have experienced poverty, or a lack of love. Prehnite aids the wearer in connecting to a deep trust with the universe that assures him that everything he needs will be provided. Overall, prehnite is a stone of unconditional love and inner knowledge. Prehnite also has a great healing effect in stressful situations. It changes our perception of what is important, and reminds us to prioritize, bringing a great feeling of calmness and peace. Prehnite also has the ability to alleviate nightmares, phobias, and deep fears. Physically, the stone has been said to heal problems in the kidney and bladder, thymus gland, shoulders, chest, and lungs. It is also good for the common cold as it has the ability to strengthen the immune system.
PrevNext
By continuing to browse the site you are agreeing to our use of cookies.