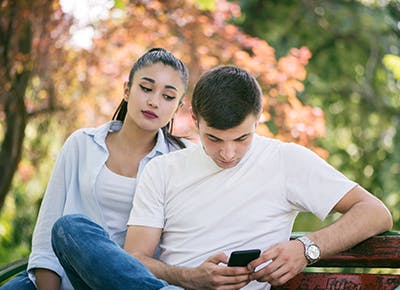 What is Retroactive Jealousy?

Retroactive jealousy (sometimes known as retrograde jealousy, or retrospective jealousy) simply means an unhealthy interest in your partner’s sexual and/or romantic past. While most people may feel jealous at some point or other about their partner’s past, it’s only passing jealousy.

Retroactive Jealousy is the relatively modern term given to a condition that is characterised by obsessive thoughts about a partner’s sexual past. It is a branch of generalized anxiety, where the symptoms manifest around habitual, obsessional behaviours that constantly trigger the anxious response. Many people often live with retroactive jealousy for years and feel psychologically crippled by the conflict between the intrusive thoughts and their overall rationality about their relationship. Intrusive thoughts are normal as it is part of the rationalisation process, however people with retroactive jealousy often obsess over these thoughts and confuse the body into thinking that the imaginative scenario is real. This is widely believed to be a form of Obsessive Compulsive Disorder (OCD), which can be hard to tackle alone.

Many sufferers of retroactive jealousy feel inclined to explore intrusive, sexual thoughts about their partners with other people. These people could be from previous relationships, one-night-stands, adultery or simply figments of the imagination. The nature of the intrusive thoughts are irrational and people with retroactive jealousy are often stigmatised, due to how easily the condition links to blame and judgement of the other person. However, it is quite often the case that people with the condition do not choose to have the thoughts; they are often resigned to living with them.

Retroactive jealousy is the result of a solidified thought habit, that subsequently triggers the symptoms of anxiety. It is because of these symptoms that the intrusive thoughts are enhanced and the physical feelings that follow these thoughts are intensified. It is common for people with the condition to over-think aspects of the condition in order to be ‘ok’ with it. This only serves to enhance its importance and results in the thoughts becoming part of the default thought routine. People are often ‘burdened’ with the condition for a long time due to the belief that irrational behaviours can overcome an irrational condition.

The Symptoms of Retroactive Jealousy

The symptoms of this condition can be categorised into two different groups – the psychological and the physical.

Where does Retroactive Jealousy come from?

Retroactive jealousy occurs as a result of a combination of factors. Below is an extract taken from Retroactive Jealousy Finally, I’m Out summarizing where the condition comes from:

Perhaps the main cause of the persistent thoughts and feelings is the underlying anxiety that accompanies the condition. Anxiety causes the nausea, restlessness, looping thoughts and obsessive behaviours. It also leaves us vulnerable to more intrusive thoughts. Anxiety leaves us with a stimulated nervous system, which then perpetuates our anxious response to unwanted thoughts. Basically, the average retroactive jealousy sufferer has a lot more adrenaline in their bloodstream than the average ‘normal’ person.

The way we are raised contributes enormously to our beliefs and values. This inevitably throws a spanner in the works when trying to deal with an irrational problem in a somewhat rational manner. The way we are conditioned, even from birth, massively affects our outlook on life, love and relationships. We are affected by family, friends, school, work, the media, religion, etc.

A person’s perspective is a vital part of challenging the condition. Even the most empathetic and intelligent of people, who perhaps regard themselves as open-minded, may sometimes have to shift their perspective of retroactive jealousy. Perspective can be changed with a little bit of work and a self-interest in wanting to better one’s self.

Self-esteem is interwoven with retroactive jealousy and also ties in with self-perspective. This doesn’t just mean sexual insecurity, but also existential security and overall outlook on life outside of the relationship.

Linked to social conditioning; research has shown that gender inequality significantly contributes to the feelings of retroactive jealousy. The problem is the overall status and perception of women globally. Gender inequality is still rife and this would inevitably been ingrained within us as part of growing up – despite what our views and beliefs are now at this current moment.

As a society in the 21st century, we are surrounded by a massive assortment of media platforms and enormous data sources where sex is at the core. This includes the mass collection and availability of adult related sites across the web. Ultimately, sex sells. It also places an enormous importance on sex and inevitably holds the power to shape our perspective of sex as time goes by. This also ties into self-image, self-worth, esteem and so on.

The origins of retroactive jealousy will be subjective to the individual. A deep analysis and counselling would be helpful to structure an approach to dealing with the condition. Siding with the rational mind during this condition can be hard to achieve, so intervention and help from a professional is highly recommended.

Retroactive Jealousy Finally, I’m Out is a self-help book for people who suffer from the condition. It is written by best-selling author and trained counsellor, Joshua Fletcher, who is also a previous sufferer of the condition and has successfully overcome it. Joshua wrote the book in order to help and educate others with retroactive jealousy, as well as offering counselling and advice for those suffering alone. He has condensed all you need to know into an easily accessible book. The book has helped hundreds of people around the world.

If you’re looking to cure and overcome your retroactive jealousy, then why not seek some help to do so?

Joshua realises that there is still a huge taboo and stigma attached to the condition, where people often feel too embarrassed to talk about it for fear of being judged. You need not worry about inquiring at The Panic Room ®, as all clients will receive a warm reception in a non-judgemental environment. The counselling and advice is also built upon a foundation of empathy, where the expert has experienced the condition himself.

Retroactive jealousy has affected people from all around the globe.

“I suffered with this horrible condition for years. My wife almost left me and I wouldn’t have blamed her. I was misunderstood about the thoughts and often blamed her for my feelings. I couldn’t stop obsessing about her promiscuous past, although I knew of it when we got married. Retroactive jealousy is such a strange, misunderstood condition.

I’d like to thank Joshua for writing his book, Retroactive Jealousy Finally, I’m Out. It has helped me so much in understanding the thoughts for what they are – thoughts! I’m not entirely there yet, however I can already see how my perspective has shifted and I’m seeing that my days are less dictated by anxiety. Many thanks!” Markus, 31, London

“I suppose you could call it bittersweet that I can now look at the famous intrusive thought and not react so anxiously. A part of me is so glad that I can observe the thoughts for what they are, rather than spend hours obsessing over them. However, there’s also a part of me that kicks myself for somewhat wasting so much time dwelling and making myself temporarily ill.

I’m lucky enough to have a very understanding and sympathetic partner. She has stuck by me through this and helped me to work through the condition. The book and a few advice sessions with Joshua really helped me to build some positive foundations. I can safely say I’m over it all now. There needs to be a service like this within the health service. Thank you Joshua.” Stephen, 26, Florida, USA

“Joshua asked me to write him a testimonial for his website and I gladly agreed to do this. I’ve been having Skype sessions along with utilizing the book and it really is helping me ten-fold. It’s strange and wonderful having a conversation from across the globe. My retroactive jealousy started when I found out my girlfriend took part in several, lewd events after she left her previous relationship. For some reason the news shocked me and I couldn’t stop obsessing. The thoughts soon became so intrusive, that they would pop up at any time of day and drain all of my energy. This went on for about a year.

Joshua introduced a new perspective of the condition and guided me at looking at my conditioning, my beliefs and my thought habits. He initially guided me through the anxiety side of the condition before returning back to the specifics involved in the thoughts. Never has a form of therapy or advice actually changed who I am – nevermind extinguish the symptoms of the condition. I highly recommend Retroactive Jealousy, I’m Out and also seeking some short-term help with Joshua. One of the best choices I have ever made.” Simon, 40, Adelaide, Australia