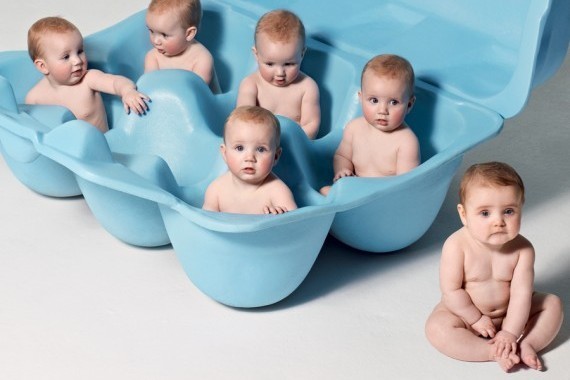 Egg freezingCavaWoman
What is egg freezing? Who should consider freezing their eggs? Costs and side effects Will frozen eggs help me to get pregnant?
Women today are choosing to have children later in life than ever before. Egg freezing, technically known as oocyte cryopreservation, can enable a woman to delay pregnancy until a later stage.
In 1980, the average American woman had her first baby at the age of 22. By 2000, that age had risen to almost 25, and in 2014, the average woman waited until the age of 26 to have her first child.

What is egg freezing? Who should consider freezing their eggs? Costs and side effects Will frozen eggs help me to get pregnant?

In the United Kingdom, the number of women having children over the age of 40 years has tripled since 1980. In 2016, more British women over 40 years old gave birth than those younger than 20 years old. In the United States, 2.3 percent of all births are to women aged 40 to 44 years.

Society may be changing, but the biological realities of fertility remain the same. Most women enter menopause in their late 40s or early 50s. In the years before menopause, a woman’s fertility declines. Although the life experience of an older woman may mean she is well equipped to be a mother, conceiving is not as easy as it is for a younger woman.

Women who are considering freezing their eggs should be aware that successful pregnancies are less common with frozen eggs than with fresh eggs. However, the use of frozen eggs can offer a hope of conceiving in the future, when previously it was impossible.

What is egg freezing?
As a woman ages, the quality of her eggs tends to decline; the eggs may contain more chromosomal abnormalities, and after menopause, women will no longer ovulate. 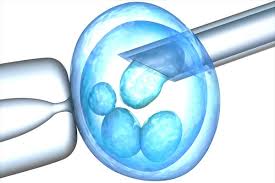 Frozen eggs can be used in future for IVF.
If a woman wants a child but is not able or ready now, she can have her eggs frozen for use at a later date.

Before the egg-freezing process begins, a doctor will take a comprehensive fertility history, assess a woman’s menstrual cycle, and do blood work to assess hormone levels.

A woman’s ovaries usually release just one egg per month. The fewer eggs there are available to freeze, the fewer chances there are of successful pregnancy.

In order to maximize the number of available eggs, a woman will undergo hormone treatment to stimulate her ovaries to produce more eggs. This treatment normally requires a woman to inject herself with hormones at home, from 1 to 3 times a day.

Most women will also take birth control pills for at least a month before having the hormone injections. This suppresses the natural cycle, and it increases the likelihood that the hormones will work.

The number and type of hormones given varies from woman to woman.

Treatment will normally include:

Around 2 weeks of injections with follicle-stimulating hormone (FSH) and luteinizing hormone, which encourages the ovaries to produce more eggs
An injection of gonadotropin-releasing hormone (GnRH) about halfway through the cycle, which prevents ovulation from happening too early in the cycle
An injection of human chorionic gonadotropin (hCG) to trigger ovulation
A doctor will perform regular blood work to assess the effects of hormone treatments. The woman will also have at least one ultrasound to detect ovulation and to assess egg development. 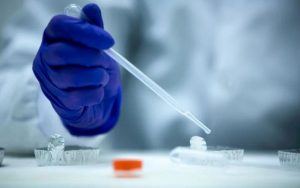 Liquid nitrogen is used to store frozen eggs.
When the eggs ripen, the doctor will insert a needle into the woman’s ovarian follicles to retrieve the eggs. The doctor will normally use ultrasound to guide the procedure, but if the eggs are not visible through ultrasound, the doctor may perform abdominal surgery to remove them.

With this more invasive approach, the doctor will make a small incision in the woman’s abdomen to insert a needle and extract the eggs. The woman will have been sedated and received pain medication.

Once the eggs have been retrieved, they will need to be frozen as soon as possible. The eggs are full of water, which can turn into damaging ice crystals if the eggs are frozen immediately. To prevent this, the doctor injects a special solution into the eggs before freezing them.

When the woman is ready to use her eggs, she will undergo in vitro fertilization (IVF).

With IVF, the egg is fertilized in a lab, using sperm either from the woman’s partner or from a donor. If the procedure works, the egg and sperm develop into an embryo that is implanted into the woman’s uterus a few days later. Most fertility clinics try to grow several embryos at once to increase the chances of a successful pregnancy.

Who should consider freezing their eggs?
Younger women have significantly higher egg-freezing success rates than older women do. Women who wish to have their eggs frozen should do so as early as possible. Most clinics work with women under 40 years old. Some clinics place restrictions on women in their 40s, and few will allow women over the age of 45 to freeze their eggs.

There are no guarantees that frozen eggs will lead to a live birth. The chance of each frozen egg leading to a live birth is between 2 and 12 percent. Factors such as uterine health, age, and overall health affect a woman’s chance of becoming pregnant.

Some reasons women freeze their eggs include:

Career and educational plans: Women who wish to pursue advanced degrees or demanding careers may freeze their eggs when they are young to ensure access to healthy eggs when they are older.
Romantic delays: Women who want to have a child with a partner, but who have not yet found one, may freeze their eggs for future use.
Cancer: Chemotherapy and other cancer treatments typically destroy fertility. Reproductive cancers might mean a woman’s ovaries are removed.
Infections, organ failure, and other health concerns: A wide range of health problems can harm egg quality.
Freezing eggs offers future hope to a woman who is receiving treatment for a serious illness that may reduce fertility. 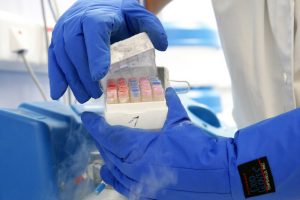 Costs and side effects
Freezing eggs can be expensive, and most insurance plans do not cover the procedure.

A single cycle can cost upwards of $10,000. Other costs include storage of the eggs and IVF, which could cost an additional $5,000.

After egg retrieval, some women may experience cramping, bloating, and spotting. Other unwanted side effects include weight gain, bloating, mood swings, and headaches, which are caused by the extra hormones that the women have been given.

In rare cases, egg stimulation can cause a condition known as ovarian hyperstimulation syndrome (HSS). The effects of HSS can include pain, nausea, and significant weight gain of perhaps 30 to 40 pounds in a few days. Very rarely, HSS may trigger blood clots in the legs and shortness of breath.

Long-term complications include a higher risk of ovarian cancer, according to some studies.

Will frozen eggs help me to get pregnant?
Data on pregnancies resulting from frozen eggs is mixed. A small review of egg-thawing data found that 414 eggs thawed in 2013 resulted in 99 live births, meaning that slightly fewer than 1 in 4 cases were successful. Research also suggests that frozen eggs are less likely to produce a pregnancy than fresh eggs.

This suggests that women may need to undergo multiple IVF cycles to become pregnant.

Factors that affect the success of egg freezing and thawing procedures include:

The age of the woman when her eggs are frozen: Younger women tend to produce more eggs, which are less likely to have defects
The age of the woman at the time of egg thawing and IVF: Younger women are more likely to have successful pregnancies
Sperm quality: Healthy sperm is more likely to produce a healthy embryo and a successful pregnancy
The clinic: The success rates of freezing and thawing eggs vary between clinics
The number of eggs frozen: A larger number of eggs offers more opportunities for IVF cycles
How does the egg donation process work?
How does the egg donation process work?
Donated eggs may be an option, instead of freezing. Find out more about this process.
READ NOW
How long will frozen eggs last?
Freezing an egg stops it from aging. A frozen egg that is a few years old will typically be healthier than a fresh egg from an older woman.

Most studies on frozen eggs looked at eggs that were just a few months old. It remains unclear how long eggs can safely be frozen.

Most researchers suggest that a woman should freeze her eggs when she is in her mid-to-late 20s, for use in her 30s. Women who are considering IVF in the future should not delay any longer than necessary. 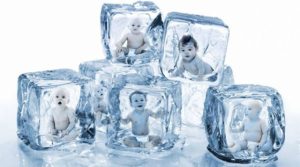 According to the University of Southern California’s fertility clinic, about 75 percent of eggs survive the thawing process.